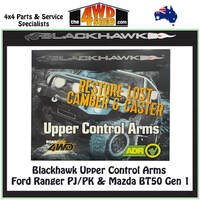 The new Blackhawk 4x4 UCAs suited to 2008-2012 Ford Ranger PJ PK & Mazda BT50 vehicles & will add an extra 2 degrees of caster over the OE arms. This allows the OE style shim adjustment at the chassis to be used for camber only, simplifying & reducing the need for excessive mounts of shims.

The new heavy duty Roadsafe "Blackhawk" range of Upper Control Arms have been designed with ease of fitment & ongoing serviceability in mind, & are a necessity for various IFS models that have been lifted 30mm+.

The Roadsafe "BLACKHAWK" arms have been designed to restore camber & caster lost on IFS vehicles once they have been lifted, by correcting the angle of the ball joint. Without restored camber & caster settings lifted IFS vehicles will eventually show excessive tyre wear & experience ride & steering issues.
With greater radius & tube sizing to suit per application, the design allows clearance of the coils, during articulation, with the outer radius also adjusted to allow for the fitment (in some cases) of 35" tyres without the issue of the of the tyres rubbing on the arms during full lock.

We haven't gone with a complicated ball joint or bushing setup, they have been designed to take on the OEM spec componentry.

Designed to maximise clearance and travel, while giving 3 degrees of caster to suit 50-70mm lift, with bonded rubber bushes and to take the factory ball joint for maximum reliablity.

Blackhawk 4×4 have identified a requirement for a program supplying replacement Upper control arm’s (UCA) that are fitted to a wide range of late model IFS vehicles. As a result we have developed the Blackhawk program – a product that will bolt in with marked improvements over the OE design.

The evolution of the Blackhawk UCA’s…

When a vehicle has raised suspension and this can be anything from 30mm or above, it will disrupt the vehicles relationship with factory set geometry and create issues such as…

Roadsafe 4WD have developed their UCA range of product drawing from over 30 years of experience in the manufacture & supply of chassis parts including but not limited to steering & suspension components.

The Blackhawk UCA’s have been designed in conjunction with industry experts to ensure vehicle fitment is comprehensive. In this process we identified a large number of issues that can be present, resulting in a list of features we included to overcome these issues…

We’ve identified this as a good amount of correction required for lifts ranging from 30-70mm, by providing a bulk fixed amount of caster, this offers the ability to utilise the factory adjustment to fine tune the caster required for your vehicles lift, with the UCA not being the limiting factor for increased droop relative to the other components.

If your application requires increased camber, we can offer offset bushings to provide more camber.

We often see larger than standard size tyres with wheel offsets having clearance issues to the OE UCA, our Blackhawk UCA’s minimise this as much as possible.

A large number of OE UCA’s hit the coil or the chassis mounts on during the suspension travel limiting the amount of travel you can achieve, with revised bends and clearances identified the Blackhawk UCA’s will not contact the strut or the chassis limiting travel unless specifically designed to do so.

Blackhawk UCA’s do not use an adjustable balljoint, with a fixed location balljoint we are able to offer OE specification for the ball joint itself. The position of the balljoint housings have been rotated to ensure the balljoint is not the limiting factor with maximum down travel.

Roadsafe specifically chose a fixed ball joint for a number of reasons. In offroad applications the ball joint receives a large amount of “bump” loads, which over time can either knock an adjustable ball joint out of position leading to increased tyre wear due to a change in caster. Changing from a fixed balljoint mount reduces the structural integrity of the mount and the mounting platform of the balljoint, with any remote traveling we need to ensure strength and reliability is not compromised.

There will never be a need to adjust or re-adjust your caster once established with the Blackhawk arms as the balljoint cannot be knocked out of position.

Regardless of where you may go, if you need to replace a balljoint or bushing you can use genuine replacement parts or aftermarket OE specification replacement items, regardless of how remote you are at home or abroad.

We incorporate tabs and mounts where practical so the OE lines can be secured discreetly where possible, reducing the potential of sticks and other debris from damaging the sensitive lines.

Does this rigidity negatively transfer to the vehicle.

No, because the Blackhawk arms use OE Rubber bushing, any NVH (Noise, Vibration and harshness) is absorbed in the rubber bushings before it makes it way to the chassis, you may find an increase in wear in the bushings which is directly related to how you drive the vehicle, the bushings are a consumable component of any vehicle, however you should expect years of trouble free service before the need to replace the bushings.

Roadsafe 4wd specially redesigned the OE balljoint into a heavy duty application, due to the nature of the application the 4wding community require a serviceable component, so we have a balljoint that is manufactured in the “hard to hard” style with a locating nylon disc that the ball stud terminates against, grease is pumped into the assembly through the top keeping everything lubricated and keeping any potential contaminants out of the boot region. The ball studs and seat area of the housing are all heat treated forming a hardened surface with the purpose of long life and limited wear.

Blackhawk arms that utilise a press in balljoint feature a machined alloy dust cap which is anodized black with engraved Blackhawk logo to deter corrosion etc, as a result creating a sealed housing to remove the balljoint from the elements such as water, dust & mud ensuring they are in the best possible environment.

All arms are sand blasted upon completion and E coated black for a durable discreet finish, E coating is the same process the vehicles manufacturer used for the original equipment you are replacing.

OEM & Blackhawk Upper control arm samples have been computer modeled and subsequently FEA tested with static and bump/lateral load tests, these results have been reviewed and certified by VASS Engineers locally who unequivocally confirm the design and materials chosen to manufacture the Blackhawk arms by long term suspension manufacturer Roadsafe Automotive products, and that they are of sound design and furthermore exceed the original equipment by design in strength and functionality.

A key feature identified by the FEA testing was the amount of deflection seen between the OE component and the Blackhawk UCA, with the Blackhawk arms being 3 times stiffer than the original equipment, resulting in significant increased handling and feel of your vehicle as the suspension cycles.

The manufacturing process is controlled by Roadsafe with a range of Quality Assurance procedures in place, some of these include…

Based on years of experience in manufacturing a large volume of suspension components, Roadsafe is able to ensure the manufacturing process is of standard delivering a high quality component to market.

The 4WD Shed is an Authorized Stockist of Blackhawk.

Trade Accounts Welcome Give us a Call for Pricing.

Blackhawk arms have been designed and manufactured to be ADR Compliant; this is a confusing term within the industry as there is not an ADR (Australian Design Rule) to comply with specifically for this product group.

So what does “ADR compliant” mean?

Roadsafe have ensured the Blackhawk UCA’s mount to the vehicle in the standard fitment position, by not moving or changing any of the mounting points at the chassis rail, by utilising rubber bushings at the chassis we have also followed the OE specifications on the vehicle.

Our new HD Balljoint is manufactured as a press fit, circlip retained (where applicable) ball joint in a fixed position, meaning it mounts in the same fashion as the OE component following your vehicle manufacturers general build practice – we have developed a product that complies with the ADR ruling as stated in the NCOP that it is manufactured to meet or exceed the factory item, with built in features & benefits to suit raised suspension.

To our knowledge, no other company currently offer’s this documentation to ensure you have a smooth transaction with your vehicle. 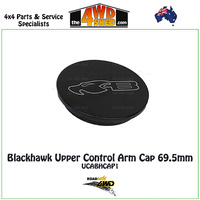 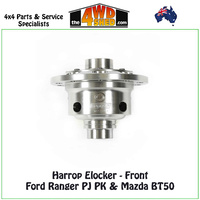