The new Blackhawk Landcruiser 200 Series Offset Rear Upper Trailing arms provide increased clearance to the factory tank & allow for the potential increase in down travel when used with longer shocks.

Blackhawk Upper Trailing Arms are built tough, so when you bump them up against rocks & tough terrain, they won't bend as much as standard arms. You've really got to give these ones a decent smack to get the 5.5mm wall thickness to buckle in.

*Arms are sold as "EACH" if you require 2 then please order accordingly.

Due to the size & weight of the rods, Free Shipping Exclusions may apply to customers in remote or regional areas such as NT, WA & Northern QLD. Please Contact us before Purchase.

The 4WD Shed is an Authorized Stockist for Roadsafe 4WD.

Why upgrade your Trailing Arms?

If you have a look under your vehicle, you might see that your rear lower trailing arms are bent (as per image above). This is due to the thin walls, and an upgrade is recommended. Bent lower arms can result in diff pinion breakage.

For lifted vehicles, Rear Lower trailing arms are also available in an extended form to give increased clearance for the rear tyre to the front of the rear guard (basically gets the diff in the factory position in the guard).

Rear Upper trailing arms are also upgraded from standard (with a massive 5.75-6.5mm wall thickness) and available as on-car adjustable to aid in diff pinion angle correction for lifted vehicles.

Why aren’t the lower arms ‘adjustable’?

The lower arms Roadsafe run as a fixed length – either standard, 11 or 16mm extended. Being low and close to the ground we want to avoid nuts and threads that can get caught up… plus after the first run in the bush any exposed thread on a lower adjustable arm gets damaged anyway, so any further adjustability is no longer a viable option. Plus, the lower arms require strength, so they don’t get bent, the turnbuckle on the lower arms simply creates a weak point that will create issues in the long run.

In saying all this though… we have just developed a Landcruiser Rear Lower Adjustable Trailing Arm to offer for easy on car adjustment.  Once the adjustment is set… forget!  After one run in the bush, any further adjustment will be limited due to thread damage.

Why 11mm or 16mm extended for the Patrols?

These extended lengths for the lower arms were determined based on the optimal tyre clearance to the front of the rear guard. On SWB 2″ lifted patrols (plus LWB’s and utes) an 11mm extended lower arm repositions the diff so the tyre clears the front of the rear guard. On SWB with greater than 2″ lift the 16mm extended rear lower arms give the best positioning in re-centering the tyre in the guard. This is particularly relevant if you want to run bigger tyres. But be wary… too big and you might have to chop the guards out.

Why are the upper arms ‘adjustable’?

The upper arms are on-car adjustable purely to allow ease of adjustability when you are endeavouring to set the required length to sort out the diff pinion angle correction.

The Upper arms are ‘shorter’ than the standard factory arms, and adjust shorter (not longer). This pulls the diff back around to replicate more of the factory positioning after a lift.

What is the ‘BENT’ upper adjustable arm for?

The TANP47AB is designed with a bend to allow for clearance of aftermarket long range fuel tanks. If during articulation you hear a bang on the rear of the driver’s side, odds are your RH rear upper trailing arm is fouling on your fuel tank. At full droop the Roadsafe TANP47AB’s bent design provides for clearance of the fuel tank. Recent upgrades now include a greater radius in the bend to allow for better articulation and droop. You can fit the ‘bent’ upper arm alongside a standard upper arm, providing you set the adjustment to replicate the bushing to bushing centre dimensions of the original arm. It is recommended if fitting a ‘bent’ upper arm to also upgrade the other side with Heavy Duty Adjustable, so as to maintain the same ‘strength’ in both upper arms on both sides.

Do I need to use both Extended Lower Arms and Adjustable Upper Arms?

It really is a bag of worms, personal preference and vehicle have a fair bit to do with it. Heavy Duty longer lower arms are the quickest, easiest, price conscious fix to get the pinion angle back within tolerance, and locate the diff in the factory position in the guard.

SWB Patrols with big lift will generally need both, as the tolerances are smaller due to drive shaft length. Basically, if you lift your vehicle (say GQ SWB for example) 4″ of spring, then the rear diff will roll forward towards the centre of the car. 16mm extended lower arms will push the diff back not quite 16mm, locating the diff into the factory position in the guard, keeping the tyre centred. Height also changes the roll of the diff, which is where the Adjustable Upper Arms come into play, so you can reverse the roll & fix the diff pinion angle back to original. If you’ve got a LWB GQ and you’re wanting to fit 35’s and a 4″ lift you should be fine with 16mm longer lower arms only. If you’re going up to 37’s you’ll probably need both extended lower arms and adjustable upper arms – and more likely a chop out of the guards.

If I fit Longer Lower Arms will I need Tail Shaft Spacers?

Tail Shaft separation can be exacerbated by the fitment of extended Lower Trailing Arms.

What Bushings are supplied in the Arms?

In the Patrol & Landcruiser rear upper and lower trailing arms Roadsafe include a high flex rubber bushing as standard. The arms are also available with an alternative Genuine rubber bushing for those customers who are keen on maintaining genuine rubber.

What Colour are the Roadsafe Upper & Lower Rear Trailing Arms?

Originally the Roadsafe Arms were gold anodised. However over the last 2 years there has been a progressive change to a black e-coated style arm. Aside from the longevity and ‘meaner look’, the black e-coat allows for a more discreet installation.

Under NCOP V3 (VSB14) the replacement trailing arms are street legal. They are a standard replacement item, fitted with no additional modification to the mount points or similar required. 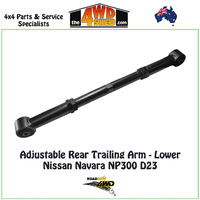